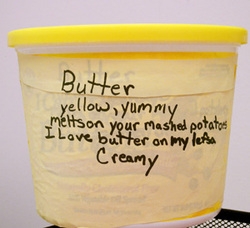 A cinquain is a five-line poem that was invented by an American poet who took her inspiration from Japanese haiku and tanka.  Two popular forms of Cinquains were developed and are what we are going to be exploring today. Cinquains are particularly vivid in their imagery and are meant to convey a certain mood or emotion.


There are a few things to remember NOT to do with a Cinquain or any short poem:  (1) don't be tempted to add extra words of syllables to fill out the form; (2) if every line sounds "finished," there is a full stop at its end and it sounds boring; and (3) a Cinquain should have a surprise in the last line.


Directions:  Cinquains can be of either of two patterns: one is built on the number of words in a line; the second is based on the number of syllables in a line.  You are to write two Cinquians, preferably one for each pattern.
The ideal Cinquain would combine the elements of both columns.
Student Example:
Elephant
Enormous, gentle
Drinking, walking, stomping
Dawdling through the forest
Mammal
---Julia Stiles (Grade 6)